iGrid is our flagship grid control for the ActiveX and .NET WinForms platforms: 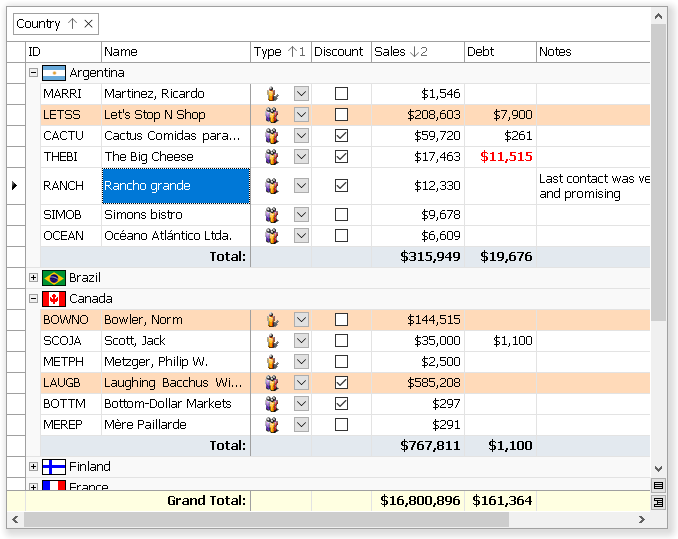 Update for iGrid.NET 10.1 available (v10.1.8)
2022-May-06
This update brings several significant improvements to the AutoFilterManager add-on. First, the time required to attach AutoFilterManager to the target grid can be 30 times less compared to the previous versions. Second, it uses much fewer graphical resources. All this became possible due to the redesigned internal architecture of the add-on.
And the last, but not least improvement: the add-on's source code was converted from Visual Basic to C#. The code parts based on the Visual Basic runtime services were rewritten to avoid any dependencies from this runtime.
There are other improvements in the add-on functionality. The iGrid.NET control itself also implements two useful improvements. You can find comprehensive information about all these changes in the updated What's New document.
What's New in iGrid.NET 10.1.8
Download iGrid.NET 10.1.8 full demo installer
iGrid.NET 10.1 with enhanced Windows 11 support and .NET 6 WinForms Designer compatibility released
2022-Mar-14
A big update of our WinForms grid control is available.
The first important enhancement in this release is the support for WinForms designer in projects targeting .NET 6. This functionality became available due to the WinForms Designer Extensibility SDK actively being developed by Microsoft and the new redistribution model of the iGrid assemblies based on NuGet packages.
Among significant control improvements worth to note are the support for the OS hover effect in scroll bars and the updated system border. The former improvement is especially noticeable in Windows 11 with its new look of scroll bars, but also enhances the visual functionality of the control in the previous versions of Windows. The latter improvement provides the OS-styled system border for iGrid.NET out of the box - what makes its boundaries look exactly like the boundaries of system list controls (ListBox, ListView).
These and other numerous improvements and optimizations are described in greater detail in the What's New file for the control.
The documentation for the product was also greatly enhanced. It contains new topics describing the latest improvements and revamped existing topics with updated screenshots and new code samples. As always, you can deploy the full electronic documentation by installing the product demo or download the manual and help separately.
Download iGrid.NET 10.1 full demo installer
What's New in iGrid.NET 10.1
iGrid.NET 10.1 Manual
iGrid ActiveX 7.5 SP2 with Windows 11 support released
2021-Oct-12
Meet a big update of our ActiveX grid control, v7.5 build 20.
The first important improvement in this release is the support for the new visual styles when the control is used in Windows 11. Microsoft added translucency and rounded corners to many interface elements in the newest update of the OS, and we updated the drawing code of iGrid ActiveX to support all these new visual effects inside our grid control as well. 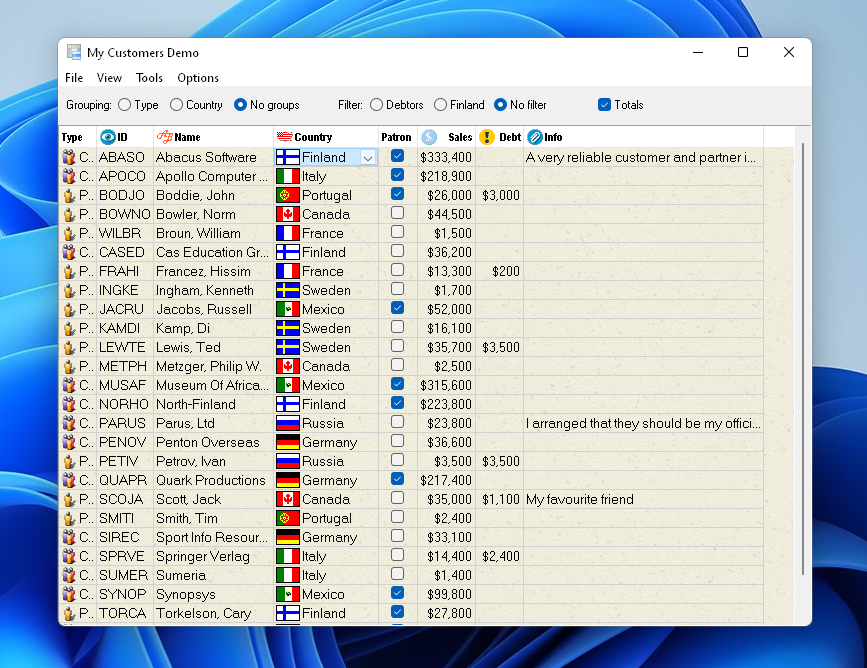 Among other improvements you will find updates in the group row drawing code. They provide a complete and more appealing look of group rows, especially if the background of a group row is not filled with a color or the color of grid lines is set to a non-standard dark color.
Detailed information about all improvements and bug fixes in this update can be found in the What’s New document for the product.
The demo applications for the product were also significantly updated. The first kind of improvements are visual improvements related to the iGrid look. Its border, cell selection color and focus rectangle were changed to correspond to the new visual styles in Windows 10 and Windows 11. The other kind of improvements are functional improvements to better demonstrate the iGrid functionality, such as enhanced drawing code for group rows or the use of iGrid as a replacement for a check list box control.
The help file for iGrid was amended as well to better describe basic concepts like built-in grouping and other members of iGrid.
What's New in iGrid ActiveX 7.5
Download the updated portable demo
iGrid.NET Demo now supports VS 2022
2021-Aug-05
Visual Studio 2022 Preview 2 is out, and we also modified the demo installer of our WinForms grid to support this new 64-bit development environment. Now iGrid.NET can be used at design time in VS 2022. 10Tec HelpViewer with the full electronic help system for iGrid.NET can be integrated into the latest Visual Studio to be used as the F1 context help as well.
Download the updated iGrid.NET X demo installer with VS 2022 support
10Tec iGrid.NET 10.0.30 released
2021-Jul-05
A new build of our WinForms grid control was published. The search-as-type window was enhanced in this build to better correspond to the modern visual style of iGrid.NET X and to support high-resolution screens: 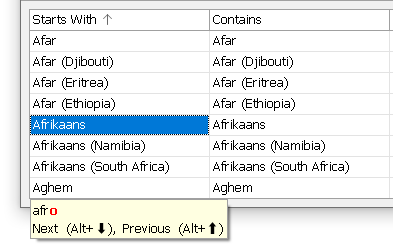 The latest build contains fixes for 3 revealed bugs in the core grid control and printing functionality. To find out more, read the updated What's New file:
What's New in iGrid.NET
10Tec HelpViewer for iGrid.NET help packages
2021-Jun-16
Today we are proud to present our new tool to work with the iGrid.NET electronic documentation. This utility called 10Tec HelpViewer is a tool to browse iGrid.NET mshc help files in the modern Microsoft Help Viewer format (MSHelp3): 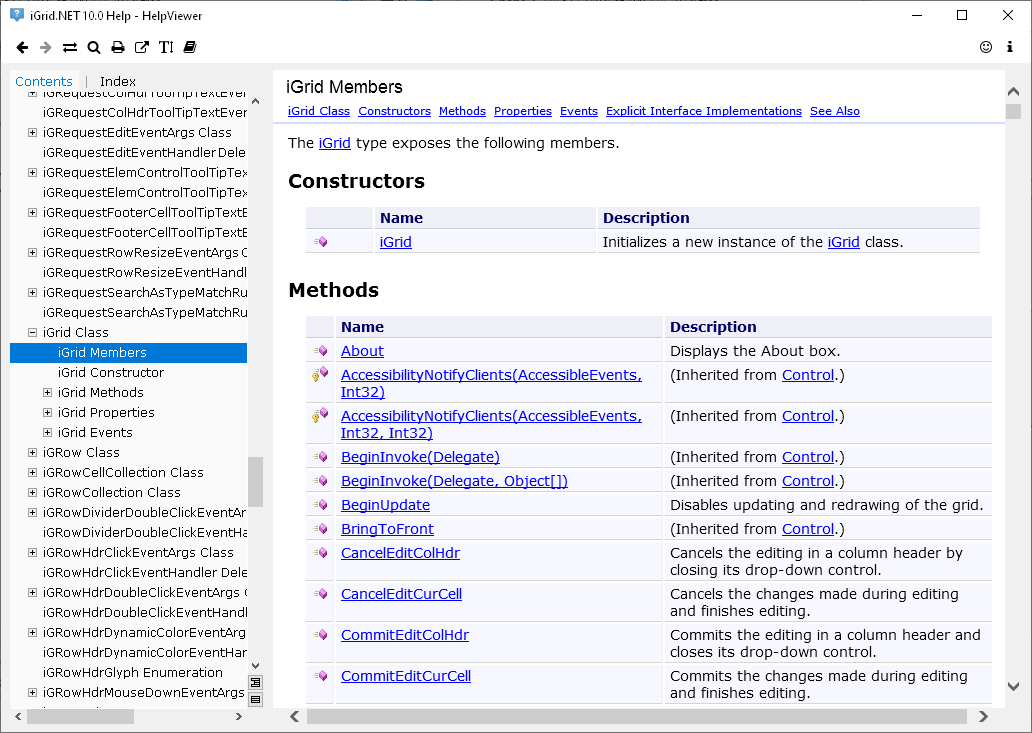