iGrid is a feature-rich ActiveX grid control. The main idea behind iGrid is to provide the developers with a lightweight and easy-to-use ActiveX grid, which is super-fast, highly adjustable, and ideal for creating unbound grids first of all.

This grid control is a multi-purpose ActiveX component that ideally fits VB/VBA development environments, such as Visual Basic 6 and Microsoft Office VBA. It can be used in all existing versions of Microsoft Windows, both client and server editions (Windows 95 - Windows 11, Windows NT 4 - Windows Server 2022).

iGrid is a 32-bit OCX, which limits its usage by 32-bit apps like 32-bit editions of Microsoft Office. However, all these apps with iGrid work well in 64-bit versions of the OS.

Usage in real-world apps is the best example of any component. iGrid is used by thousands customers throughout the world, and below is a screenshot of the network inventory system called NEWT developed by Komodo Laboratories using our ActiveX grid: 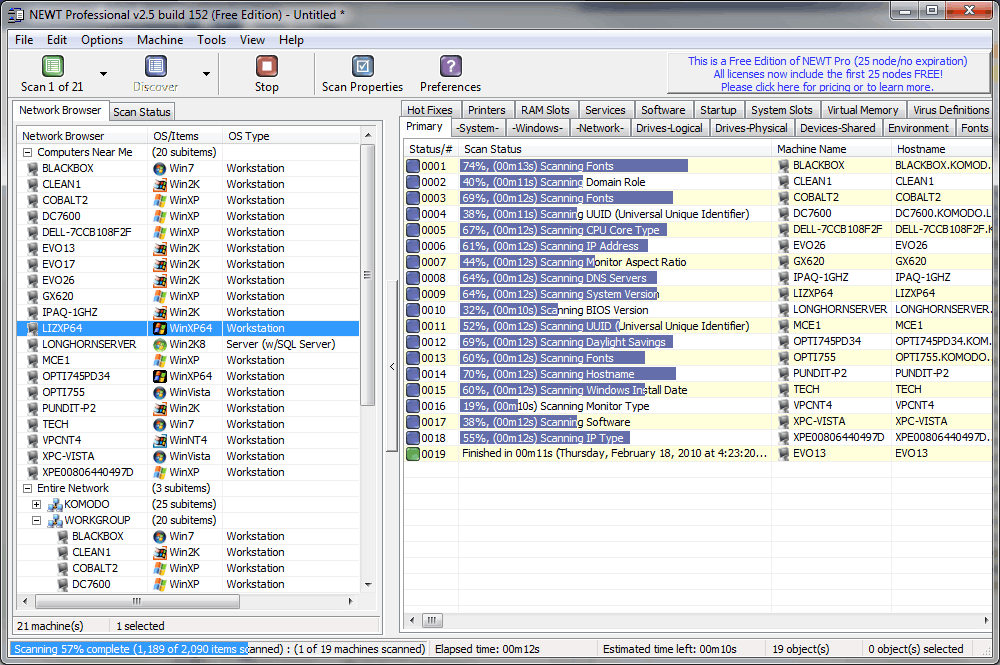 iGrid is the core component of the NEWT visual interface. It is intensively used in many forms to display tons of data about scanned computers. The cells are formatted on the fly and work fast for such big amounts of rows. Some of them contain progress bars to indicate the scan status for each pc; others display cool 32-bit icons with alpha-channel to give the user the best visual representation of retrieved information. In dialogs iGrid is used to adjust the list of columns allowing to do WinAMP-styled reordering of selected items. And all these things are put together by one more iGrid in which the built-in tree view feature is exploited!

Our grid control was rated 5 of 5 by 40 customers. Below is a randomly selected review:

When I was looking for a tool that extends functionality of the standard Microsoft Visual Basic 6 grid controls, I found a reference to iGrid. It looked impressive and its interface was flexible and very easy to implement right out of the box. In no time my application looked and functioned the way I wanted. iGrid has lots of features for various types of applications.
If you need an advanced grid product for your next development project (and for a bargain price), you found it!
Tatyana Pogrebinsky,
Software Engineer,
L-3 Communications,
San Diego, USA

Deeper look at the distinctive features »

iGrid is one of the most versatile replacements for the Visual Basic ListView, VB6 DataGrid Control and FlexGrid (MSFlexGrid/MSHFlexGrid) controls which are no longer supported by Microsoft. Moreover, in this case 10Tec ActiveX grid provides you with the built-in cell editing functionality - what isn't possible in FlexGrid and ListView.

We are proud to say that despite the widespread occurrence of the .NET Framework, we are still continuing the development of iGrid ActiveX. As a part of the everyday support process, we are preparing samples based on the email requests of our customers, and the best of them are published in the online library of code samples for iGrid. The comprehensive What's New document supplied with the product also proves that we are doing our best trying to provide the developers with the best ActiveX grid control on the market today!

What's new in the latest versions »