Home » News Archive
The revisited edition of iGrid, v2.51, is available
2004-Sep-29
The newest release of iGrid, v2.51, is available now. The recent version of iGrid (build 0472) implements practically the same features as iGrid 2.5, but it fixes all minor bugs and all discrepancies in its methods, events and properties found by us and our customers. We implemented the latest version as a separate OCX control as there are some changes in iGrid members and in the general case you cannot simply replace iGrid 2.5 on iGrid 2.51 in your projects without changes in your source code. iGrid 2.51 can coexist without any problems with the previous version of iGrid in the same system.
Some words about new features. iGrid 2.51 allows you to create no-clip cells (the text from such a cell is not clipped by the cell's left or right edge). The FillFromRS method in the newest implementation assigns to a column tag value a string in the form of "[<table_name>].[<field_name>]" so you are able to determine the real name of the field and table used to populate this column. Ampersand ("&") is no longer treated as a prefix character in cell values by default.
The newest build of iGrid can be used both in VB6 forms and MS Access forms. The special separate MS Access compatible build of iGrid 2.5 existed for this purpose earlier, but we redesigned some internal iGrid features so you can use the same OCX in MS Access now. The rest of changes made in iGrid 2.51 are reflected in the What's new file supplied with the component.
iGrid 2.51 help file is available
2004-Sep-29
You can download iGrid 2.51 help file which reflects all changes implemented by us in the newest release of iGrid control.
New samples in iGrid 2.51 Main Demo
2004-Sep-29
iGrid main demo was also updated. It implements several minor improvements in the existing samples and contains 3 new samples:
1) FolderSizeManager - allows you to view the size of each folder in a handy graphical representation using a bar chart. Implemented as a standalone exe and can be redistributed for free:

2) Add, Edit, Delete... - demonstrates how to edit a database table in iGrid using the direct connection to the database.
3) Activity Network - this sample is based on the newest feature of iGrid 2.51 - no-clip cells. It uses this feature to represent an activity network diagram in a handy graphical view:

Other minor changes and improvements are reflected in the What's New file supplied with the demo.
iGrid 2.51 Extra Demos Pack updated
2004-Sep-29
3 new samples were added to iGrid 2.5 extra samples pack. The first new sample, DragSelWinampStyle, allows you to drag selected rows inside the same grid like the well-known Winamp player allows you to do it in its playlist. A simple trick implemented in the Transparent Background sample demonstrates how to make the background of the iGrid ActiveX grid transparent and display the form's background picture hidden by the grid as the grid's background: 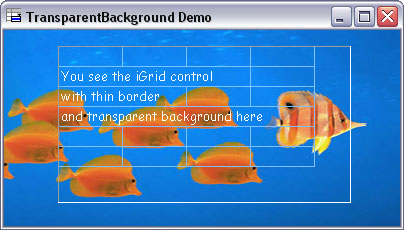 And the last new sample, EnterMultilineText, explains how to reprogram iGrid standard keys. This approach applied to this sample allows you to use the ENTER key to enter a new line of text in a multiline cell (the default combination is CTRL+ENTER) and F2 to store changes in the cell (the default key for this purpose is ENTER).
iGrid, xDir and CaptionX won the highest award at 5Cup.com
2004-Aug-19
All our ActiveX components, iGrid, xDir and CaptionX, won the highest award (5 cups) at 5Cup.com.
The next big update of iGrid 2.5 (build 0420)
2004-May-05
We have worked hard at iGrid 2.5 ActiveX for the last 4 months, and now you can download the latest release of iGrid with improved functionality and productivity. Among the new features you'll find:
- no external library dependencies - iGrid no longer refers MS ADO 2.5;
- the ability to sort the grid while group rows are present;
- iGrid can initialize combo box cells much faster (thousandfold or even more);
- the optimized scrolling code which allows you to scroll iGrid with a large amount of rows (100'000+) much faster;
- multiple selection in row mode also works enough fast;
- more compact cells structure in a row if you use row texts and have columns excluded from the selection.
This build of iGrid contains the description of each member (properties, methods, events) you can see in VB Object Browser and the Property Editor dialog. You are also able to use context help if you press F1 on iGrid member in code editor.
We strongly recommend you to use this build in application development. Read also carefully the What's New file supplied with iGrid before you incorporate it in your app.
iGrid 2.5 help file updated
2004-May-05
iGrid 2.5 help file was updated to reflect all recent changes made in iGrid 2.5. The help file contains new topics that describe many aspects of using iGrid. iGrid OCX also refers to this version of the help file when you use context help by F1.
iGrid 2.5 Main Demo update
2004-May-05
The latest release of iGrid Main Demo is available. It enhances some demos using the new features of iGrid 2.5 build 420. For instance, the My Customers sample implements total rows and you can sort the grid while group and total rows are present (this concerns the Outlook sample too). The Outlook sample contains the improved code for grouping rows and some new functions:
- the option to preview maximum 3 lines of message body or the full body text;
- row heights are adjusted automatically to display as much lines in message preview as possible when you resize a column;
- a clickable icon to expand and collapse the truncated message preview;
- a tooltip for this icon;
- the new Size column contains values in the "### KB" format and can be sorted properly using custom sorting.
You can see the tooltip for the collapse/expand message preview icon on the following screenshot:

iGrid 2.5 Extra Demos Pack update
2004-May-05
The Extra Samples Pack was updated according to the new build (0420) of iGrid. The pack contains the enhanced sample that demonstrates dragging and dropping cells inside iGrid (now it highlights the target cell and scrolls the grid automatically when the mouse pointer is outside of the grid while the drag-n-drop operation is in progress). Two new demos, EmptySpaceColor and MultiplyCells, were added to the pack. The former explains how to fill iGrid contents area not occupied by cells with a specified color (like the BackColorBkg property in MS FlexGrid); the latter explains how to perform your own actions as the user is entering text in text box cells and implement your own keyboard filter in iGrid.
iGrid 2.50 build 0357 published
2004-Jan-22
iGrid 2.50 build 0357 enhances its Sort method (now it places sort icons and sort numbers in the headers of the columns passed as parameters to this method).
New samples in iGrid 2.5 Extra Demos Pack
2004-Jan-22
The latest release of iGrid additional samples set contains 6 new samples. They explain how you can disable iGrid scroll bars and scroll the grid programmatically, how to drag and drop cells inside iGrid, how to change the font of command buttons in iGrid cells and draw them with XP styles. New samples also demonstrate two tricks you can use to select the entire row with single mouse click and implement custom sorting using different algorithms for different columns.
The pack contains a new demo, thumbnail viewer, which allows you to browse thumbnail images of files in iGrid. In this demo images are not placed in an imagelist control but loaded directly into memory and then drawn in iGrid cells. The demo uses the IExtractImage system interface implemented in Windows system shell32.dll library to get thumbnail images for files.
iGrid 2.50 build 0355 published
2004-Jan-06
The latest build of iGrid allows you to edit right-to-left (RTL) text so iGrid can be used with such languages as Arabic and Hebrew and contains two minor bug fixes.