Home » News Archive
iGrid.NET 5.0.2 with enhanced support for Windows 10 published
2015-Dec-07
This service release of 10Tec WinForms grid fixes two problems related to the drawing of header using the OS visual styles. The first enhancement adds extra lines in row and column headers so they are visually separated from adjacent cells much better in Windows 10:

The other change fixes one visual problem with drawing the grid header in disabled state.
iGrid ActiveX 6.0 released
2015-Nov-27
We are proud to say that we are still actively working on our great ActiveX grid, and a new major version of it is available. iGrid v6 is a really significant and important update since the release of iGrid v5 in 2011. 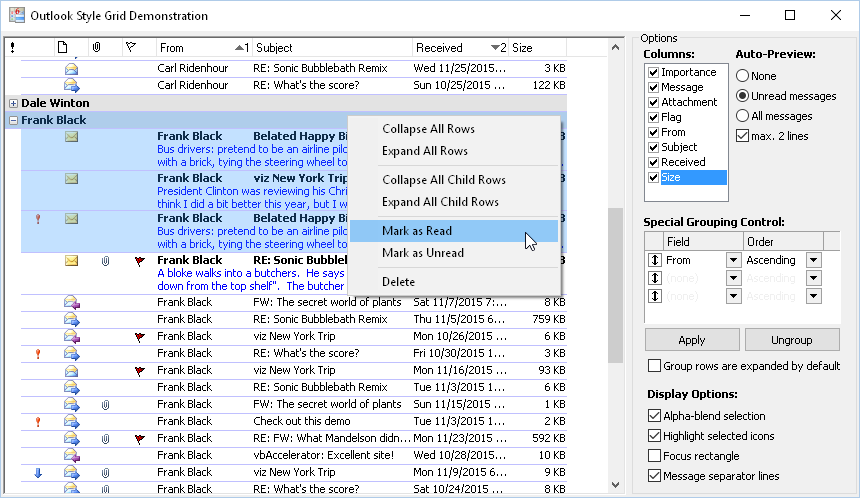 The new version adds dozens of new features, enhances existing functionality, and supports Windows 10. Among the latest changes you will find:
Some parts of iGrid were optimized, so it uses less resources or works faster now. The new release also fixes some revealed bugs and annoyances, such as flickering in Microsoft Access while opening/closing cell combo lists.
The demo application was updated to demonstrate the usage of iGrid v6 new features. The demo installation package also includes the updated version of the accompanying electronic documentation for the product, which was rewritten and reorganized. The new contents of the CHM help file allow you to find answers to your questions easier and provide you with more detailed descriptions of the iGrid features.
The comprehensive list of all changes takes more than 15 printable pages. View the What's New document to find out more about the new features in this release of iGrid.
Developer's Section on 10Tec Forum established
2015-Nov-27
A section dedicated to applications built with 10Tec products have been recently established on our forum.
Visit this section to see how our components are used in end-user apps. If you are a 10Tec registered customer and have an application that uses our components you want to show to others, we encourage you to do that in this new section!
New responsive design of 10Tec website
2015-Jun-19
This update of our website makes it adaptive to handheld devices, so you can read this site much easier on your smartphones and tablets. We also enabled special mobile mode for the forum to make possible its usage even from a mobile phone.
Enjoy reading our website on your favorite mobile device, and feel free to send us your comments or suggestions regarding the new design.
iGrid.NET 5.0 with new footer section released
2015-May-15
A new significant update of our WinForms grid control is available. The main innovation in this version is a new footer section displayed at the bottom of the grid. This non-scrollable area, which is always visible like the header, can be used to display any additional data for grid cells - such as totals, custom text and graphics messages:

Footer cells support all formatting options available in normal cells - custom colors and font, text alignment, format string. 5 aggregate functions, Sum, Average, Minimum, Maximum and Count, can be calculated automatically and displayed in footer cells. If the standard cell layout is not enough, you can use custom drawing to represent any info in footer cells:

The long list of other improvements in this major update includes the ability to specify empty space after the last column and row, the scroll bar value changing event to modify the position of the thumb box on-the-fly, new methods for cells and column headers that simplify coding, and fixes for all recently revealed bugs.
The electronic documentation was also greatly enhanced to reflect all latest changes and new functionality. The iGrid.NET manual contains renewed sections that describe the classic concepts of the grid control much better.
Read the accompanying comprehensive What's New document to find out more about all changes and enhancements.
AutoFilterManager add-on for iGrid.NET runs in .NET Framework 2.0
2015-Mar-12
We still have customers restricted by the version 2.0 of the .NET Framework, and they need our iGrid.NET with the autofilter functionality in this environment. The previous versions of AutoFilterManager used LINQ, and the minimal version of .NET for it was 3.5 because of this. But we have managed to rewrite AutoFilterManager without LINQ and even optimize it a little bit so now it can be used in .NET 2.0. You can request this special build if you need it.