Home » News Archive
iGrid.NET 6.0.34 with .NET Core support released
2019-Nov-01
The first and main improvement in the latest version of our flagship WinForms grid control is full compatibility with .NET Core 3.0 which supports WinForms apps and controls. The source code of iGrid.NET was tested for compatibility with the release version of .NET Core 3.0 and changed to make it possible to recompile the product as 100% native .NET Core library. Among other changes in the latest iGrid.NET build you will find enhancements related to resource usage and fixes for all bugs revealed by the moment of publishing.
The demo application of iGrid.NET was enhanced. One of the most significant improvement is the Folder Size Manager sample rewritten as a multi-threaded app. This sample demonstrates how to use iGrid.NET as a TreeGridView control and populate it from a background thread created with the standard .NET BackgroundWorker component: 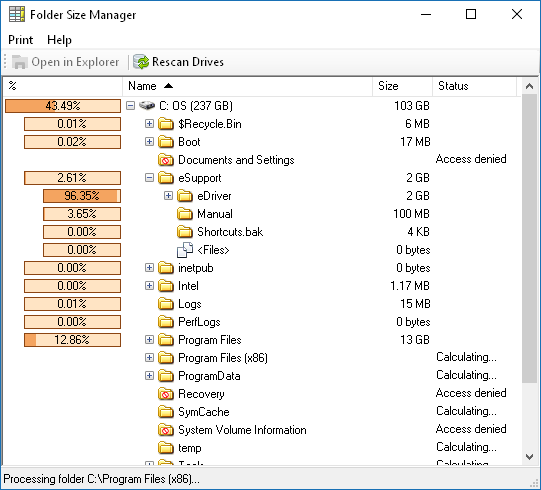 The electronic and printable documentation for the product was improved as well. Now the iGrid manual is provided in 3 formats - as a traditional PDF document, a Microsoft Word document and HTML stream. The last two versions of the manual can be used to reformat the manual for any desired paper format and/or for convenient reading from screens with various resolution (tablets, e-book readers, etc.). The contents of the manual and reference topics for iGrid.NET members were supplemented with new samples and descriptions. All minor problems in the documentation like broken links and missing references were also fixed.
The demo installation program including the product demo and documentation was updated. It has a more modern light interface, uses bigger fonts and performs faster due to the new technology of adding of the component icons to the Visual Studio Toolbox compatible with all modern editions of Visual Studio 2017 and 2019.
DocMounter 2.2.8 released
2019-Nov-01
A new version of the .NET documentation tool we are using for our .NET components is available. This version brings interface improvements and fixes some minor problems.
iGrid ActiveX v7.0.17 (Service Pack 2) out
2019-Sep-06
The second service pack for iGrid OCX 7.0 fixes two problems found in the last six months since the previous update. One of the problems is related to working with combo cells in the user interface, the other problem is related to row removal from code. Read the What's New file for more info.
New and updated extra samples for iGrid.NET
2019-Mar-29
Recently we have implemented new samples and enhanced existing samples in the online library of extra samples for iGrid.NET. One of the new samples is Explorer-Like Column Chooser. It demonstrates how to implement the column chooser functionality similar to what we can find in the Windows Explorer. The column chooser for our WinForms grid has some benefits, such as the ability to filter the column list by a substring:

Another new sample is Export to Excel, Late Binding. It is a revamped version of the previous Export to Excel sample, which is now based on late binding to Microsoft Excel automation objects. The new approach is free from all problems related to using of the Microsoft Office interop assemblies in real life.
The old Smart Tree Creation sample was replaced with the new iGrid Tree Helper Methods sample. The new approach provides tools to simplify work with tree grids in the form of extension methods.
The Multi-Column Drop-Down List and Subtotal Manager samples were enhanced based on the requests of our customers.
iGrid ActiveX portable demo
2019-Mar-29
To demonstrate how the Windows Side-by-Side Assemblies technology (also known as SxS) can be used to create portable versions of executable applications using our ActiveX grid control, we implemented a new portable demo of iGrid ActiveX. The importance of this approach is that neither administrator rights nor any access to the Windows registry are required to launch apps with iGrid ActiveX.
You will find the new portable demo on our Download page.
iGrid ActiveX v7.0.15 (Service Pack 1) available
2019-Mar-15
An update for our ActiveX grid control is available. It fixes all bugs revealed after publishing the new major release and brings some enhancements related to selection of cells and rows. The accompanying help file in the CHM format was also updated to reflect all changes in the latest build.
iGrid.NET 6.0.25 (SP3) with enhancements out
2019-Mar-14
The latest build of our WinForms grid control fixes all bugs revealed by our customers since the last update. Some of the fixed problems were related to printing. The new version also brings several enhancements, and one of them is the revamped algorithm that calculates totals in footer cells faster.
The product manual in the PDF format and its counterpart in the electronic help system in the MSHelp 3 format were also improved.
As always, all changes are described in detail in the supplied What's New document: