Home » News Archive
DocMounter 2.3.0 published
2020-Nov-30
All enhancements done in our .NET documentation tool during past year were published as a new minor version release today. Read the What's New file to find out more about the changes in the product.
iGrid.NET X SP1 (v10.0.20) available and compatible with .NET 5
2020-Nov-27
Today we publish the first big update for iGrid.NET X and its PrintManager add-on since the release date. The most significant enhancements in today's release are related to PrintManager. Now it supports printing of the footer section, and its print preview window can be scrolled with the mouse wheel. You will find other useful changes in the What's New file, including full support of new concepts introduced in iGrid.NET X (such as the Z-Order for grid lines) and fixes for all revealed bugs.
The grid control itself was also improved. First, we made its text-to-value algorithm processing entered strings more sophisticated to help the user to work with formatted numeric values easier. Second, the grid line Z-Order system was enhanced even more to provide a nicer look of iGrid with custom grid lines. And last but not least, several minor bugs revealed in our WinForms grid were also fixed.
Microsoft released .NET 5 with WinForms support, and we tested the special build of iGrid for .NET 5 in this environment. Unfortunately, the support for third-party controls in .NET 5 projects is still limited and does not allow usage of such controls at design time, but our WinForms grid is .NET 5 compatible and can be added to forms and configured from code without any limitations.
As always, we are constantly working on improving the documentation for our product. The iGrid.NET manual and electronic documentation were supplemented with new topics and code samples, and some existing topics were rewritten for better understanding of iGrid concepts and to reflect the changes in the latest major version.
iGrid ActiveX 7.5 released
2020-Oct-15
Despite the fact that the ActiveX platform is losing its popularity among developers nowadays, we are continuing to support and enhance our ActiveX grid based on requests of our customers. Today's release of iGrid adds a bunch of new features. One of the most significant of them is the ability to resize rows and columns by dragging grid lines. Notice the special H-Split cursor in the center of iGrid indicating that row resizing is possible: 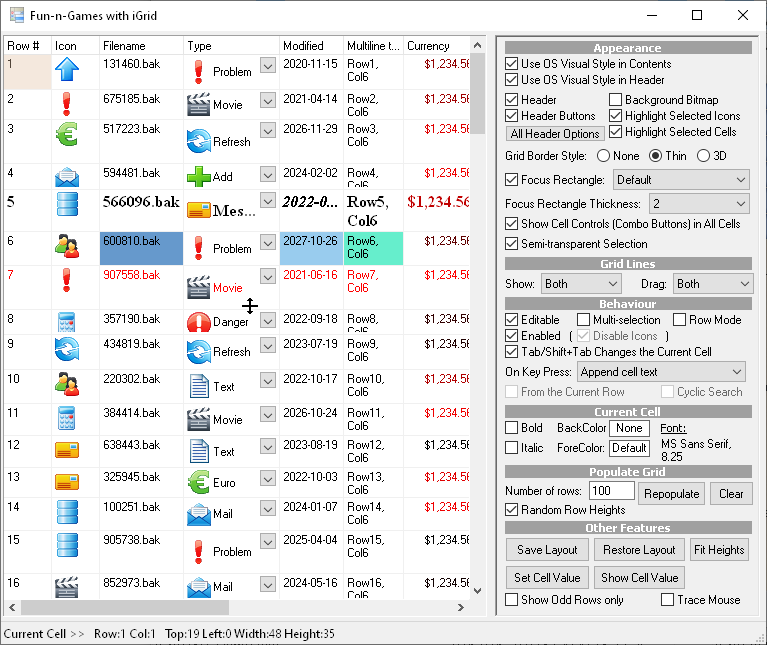 Among other new features are a PopupMenu method allowing you to display iGrid's built-in context menus at any position on the screen, tools to change the mouse pointer (including the ability to use true standard OS cursors like the Hand cursor), and several properties for fine tuning of internal parameters.
The revamped focus rectangle drawing provides you with the ability to change the focus rectangle thickness and display it while editing. One serious problem related to incorrect drawing of the focus rectangle in all previous releases of iGrid was fixed in this release.
The help file for iGrid was also enhanced. It contains the help topics for all new members introduced in iGrid v7.5 and extended information about members implemented in the previous releases.
To find out more about the improvements in the latest release, read the comprehensive What's New document.
iGrid.NET X released
2020-Jul-10
Our congratulations to all developers using our WinForms grid control for .NET! iGrid.NET X has been released today. It is a big revamp of the existing 10Tec WinForms grid control with a cleaner modern UI and support for high-resolution screens and tablets: 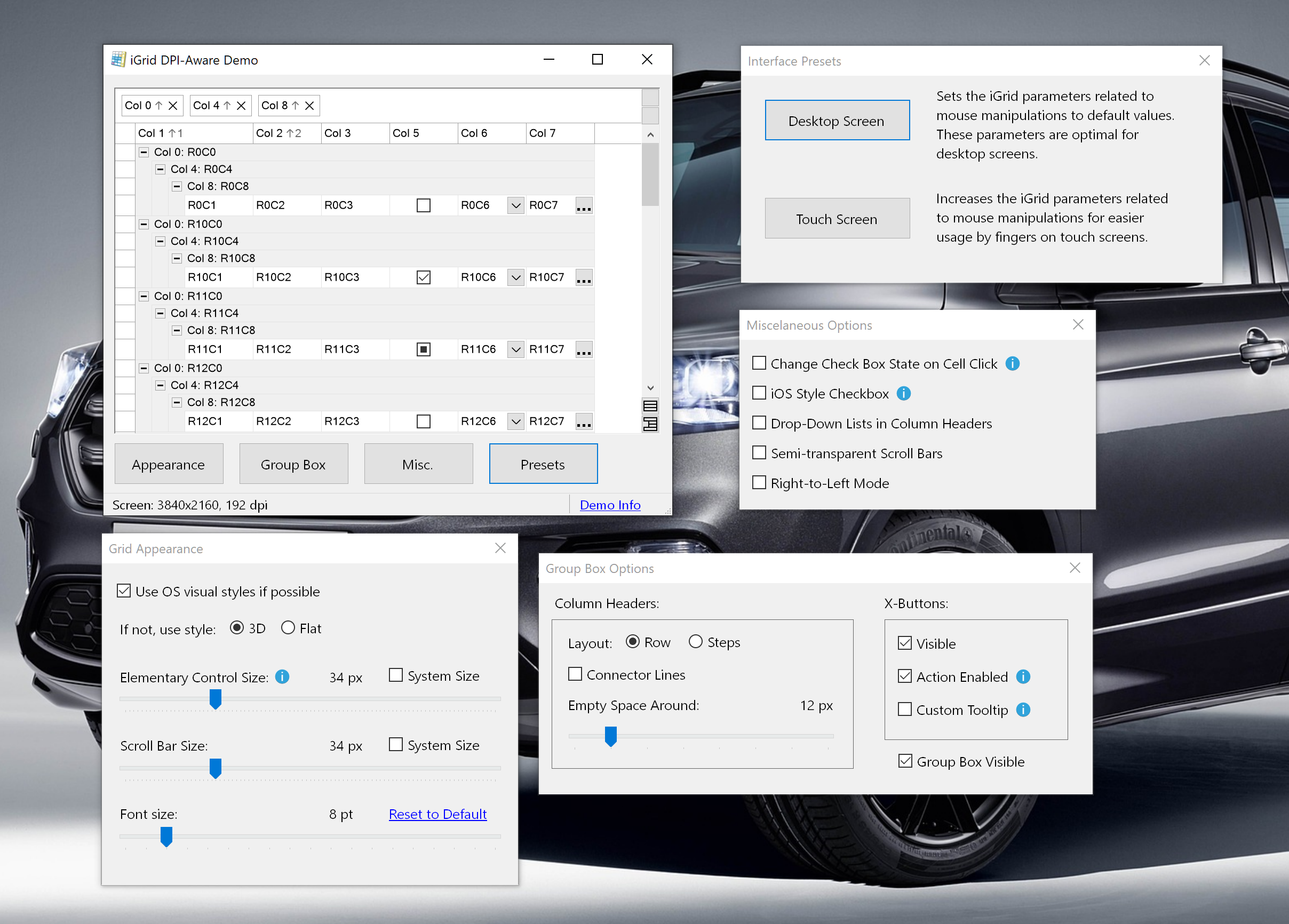 The X letter is a roman numeral equal to the 10th version number of the product. It reflects the huge amount of changes made in the product since the previous major release, v6.0. X is also a symbol depicting one of the new UI elements in the grid control - remove buttons in headers of grouped columns.
The work on this product was started in spring 2019 when we decided to release a product that suits the modern software and hardware environment. In addition to that, we wanted to enhance existing grid control based on customer requests gathered since the first versions. Many of these improvements could not be done in the original product and required rewriting of its basic infrastructure modules. Now this hard and long work is finished.
iGrid.NET X brings numerous improvements related to usual interface tasks. Among them are the aforementioned x-buttons in grouped column headers to easily remove columns from grouping and one row layout for the grouping panel. There are non-UI improvements related to optimized memory usage and new members providing up to 60% performance gain in operations with cell values. And sure, the new iGrid.NET supports .NET Core 3.0/3.1 and the forthcoming .NET 5.
The demo installation and its portable version include the new iGrid.NET X DPI-Aware sample. This sample is dedicated to demonstration of the new features of iGrid.NET X. The demo was built to support the native resolution of high-resolution screens and allows you to change the size of iGrid UI elements dynamically for comfortable use on tablets.
Download the demos to see iGrid.NET X in action and read the 30-page comprehensive What's New document to find out more about this release.
iGrid.NET 6.0.37 with critical bug fixes released
2020-Feb-12
This release of iGrid.NET fixes two critical problems related to the right-to-left mode and entering symbols with diacritical marks like circumflex or accent (â, é, etc.). One minor problem related to non-sortable rows was also fixed in this release.
10Tec Forum engine updated
2020-Feb-12
10Tec Forum was upgraded to the latest version of the YetAnotherForum engine. The new version provides appealing and modern responsive interface suitable for usage on desktop workstations and mobile devices. Visit our forum to see its new look, to know how our products are used in real-world apps and to ask your questions if you have ones.