Home » News Archive
iGrid ActiveX v7.0 released
2018-Nov-26
Great news for all developers using our ActiveX grid - a new major update of iGrid ActiveX was released today! The new version of iGrid brings new features and significant performance improvements. In some scenarios, iGrid 7.0 may work up to 200 times faster compared to its previous versions. Traditional interactive operations like grouping were also optimized and show various performance gain depending on data.
The electronic help system for iGrid was improved as well. The revised iGrid CHM help file contains a description of all new features implemented in the v7.0, more detailed help topics for existing members and the reorganized Programmer's Guide section that helps to find required information faster.
iGrid.NET 6.0.18 (Service Pack 2) available
2018-Aug-28
This update for iGrid.NET mainly fixes several bugs revealed since the previous update in May. One of them is the problem of a double shadow for forms created after an iGrid drop-down list was displayed. The bug fix for this problem also brings a new implementation of the shadow effect for drop-down controls in our WinForms grid. The new build uses the corresponding feature from the modern Aero theme from the OS and provides a consistent look and feel that works best in Windows 10: 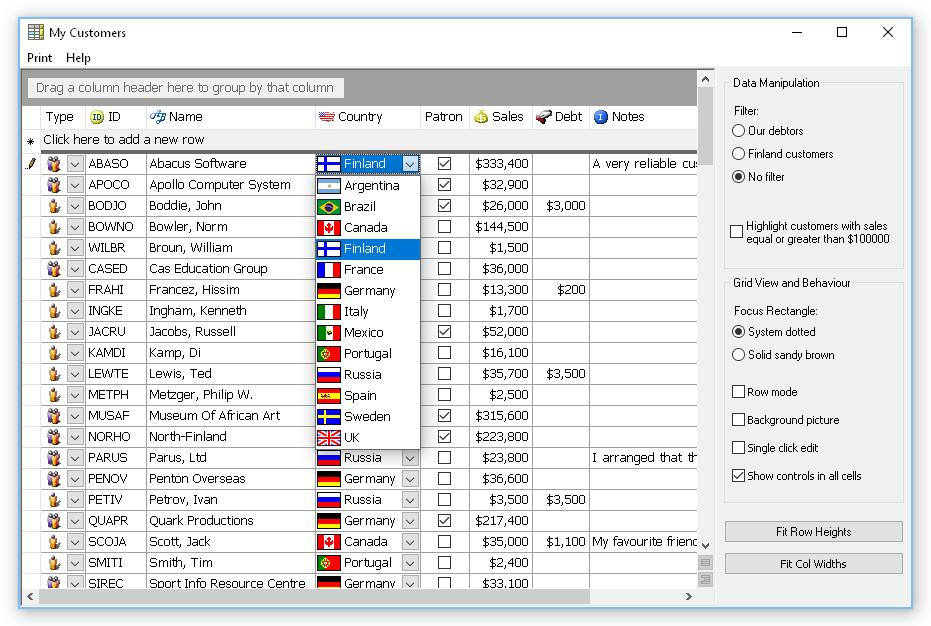 For more details, read the comprehensive What's New document for the product:
Improved extra samples for iGrid.NET 6.0
2018-Aug-10
Two improved extra samples for iGrid.NET 6.0, Mask Edit and Backup Manager, were published. The first sample was rewritten almost from scratch to implement a much better basic infrastructure for input mask editing in iGrid cells. The Backup Manager class from the second sample was adopted for iGrid.NET 6.0 to use its new features and provide better performance.
iGrid.NET 6.0 Service Pack 1 released
2018-May-18
This update of iGrid.NET with the full version number 6.0.12 contains bug fixes for all problems revealed in the core grid control and its add-ons since the release date. The latest version also fixes one compatibility issue with .NET Framework 4.5 and later versions related to incorrect implementation of the SystemInformation.FrameBorderSize member in these versions of the framework. For more info, read the What's New document supplied with the control:
iGrid.NET demo update
2018-Mar-01
A new sample demonstrating the integration of the cell merging functionality with other grid features was added to the iGrid.NET demo. This is the Project Plan sample that shows how merged cells, tree functionality and post-paint drawing can be used together to display project plans in a Gantt chart form: 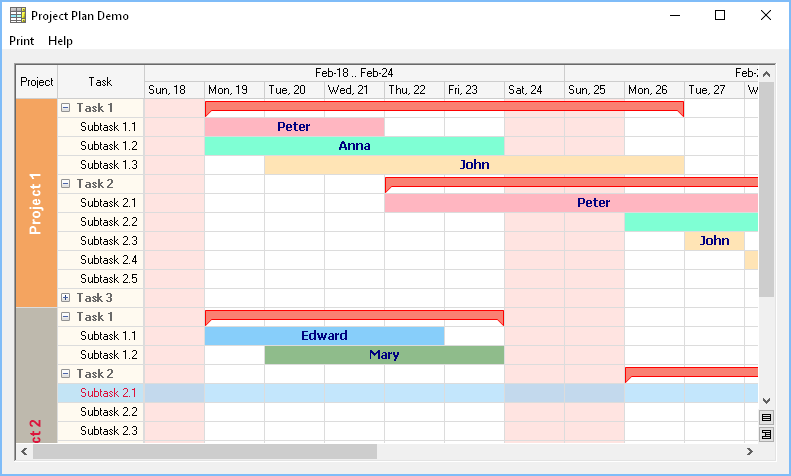 A standalone demo of the iGrid.NET control is also included into the demo package now. It does not require installation or administrator privileges to launch it and can be used to quickly evaluate the features of the iGrid.NET product without deploying the full demo package.
iGrid.NET 6.0 with versatile cell merging released
2018-Feb-15
A major version update of our WinForms grid control was released today. iGrid.NET 6.0 is a big update that implements numerous improvements compared to the previous major version, and the most significant of them is the long-awaited versatile cell merging feature for normal cells. Now iGrid can be also considered as an advanced DataGridView alternative with merged cells:

The updated PrintManager add-on released with iGrid.NET 6.0 supports printing of merged cells and some new options. In addition to all that, the new iGrid.NET contains performance improvements and bug fixes for all bugs revealed since the previous public update. All changes in the control and its PrintManager add-on are listed in the comprehensive What's New file on 11 pages.
The printable manual and electronic help system for iGrid.NET were updated to reflect all new concepts from the version 6.0. The new iGrid demo contains several new samples that demonstrate usage of merged cells in various scenarios.
The demo installation package was also enhanced for faster deployment of the control DLLs and all accompanying files.
iGrid ActiveX v6.5.84 available
2018-Jan-19
This update of iGrid fixes 3 minor problems. One of them is the annoying beep when the user presses the Delete or Backspace key in our ActiveX grid in Microsoft Access forms, which is a common problem for all 3rd-party ActiveX controls used in this development environment. Now iGrid is free from this drawback due to a special low-level keyboard hook based on the IOleInPlaceActiveObject COM interface.